How To Achieve ‘Hendrix Sounds’ With Blues Guitar Chord Inversions

Knowing this concept and using it in your improvisations as a guitar player, will give you this overall bluesy Hendrix sound. Hendrix often uses this variation of the barre shaped major chord with some embellishments in songs. It’s important to understand this concept to bring your blues guitar playing to the next level. This concept I’m about to tell you is used in so much songs such as ‘Yellow Ledbetter’ from Pearl Jam or ‘Don’t let me down’ from the Beatles. It’s Jimi Hendrix on the other hand that uses this technique all the time.

This ‘Hendrix Major chord’ is a variation of the regular barre shaped major chord with the root note on the A string. The basic major chords are made up with the first, third and fifth notes from their corresponding major scale. The root note can be found in the low range of the chord. It’s in other words the lowest note of the major chord. I indicated the chord note numbers on the diagram below to give an overall view of where the notes can be found in the chord. The next chord diagram shows a D major barre chord: 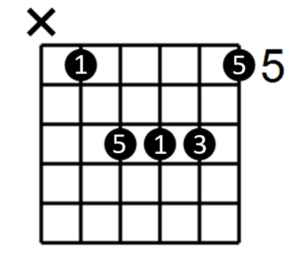 It’s possible to put a third or fifth in the low range of the chord, in music theory we call that an inversion of the chord. Making the third the lowest note in the chord is exactly what Hendrix did in lots of his songs and improvisations. Let’s take a look at how you change this D major barre chord to its first inversion:

This inverted major chord is still constructed out of the same three tones as the basic barre chord position. The big advantage on the other hand is the way your hand is placed on the neck of the guitar. Your pinky is now free to move and can be used to create embellishments and licks by hammering-on and pulling-off on the A, D, G string 9th fret. We have basically moved our hand to the box position of the major pentatonic scale. So now it’s possible to improvise licks in this pentatonic box position. Playing a chord in this position opens a lot of doors to play blues licks in combination with chords just like Jimi Hendrix did. Take this lick for example:

You can learn this lick and embed it in your own blues vocabulary. It’s also possible to try and improvise with this concept to create your own blues licks on guitar.